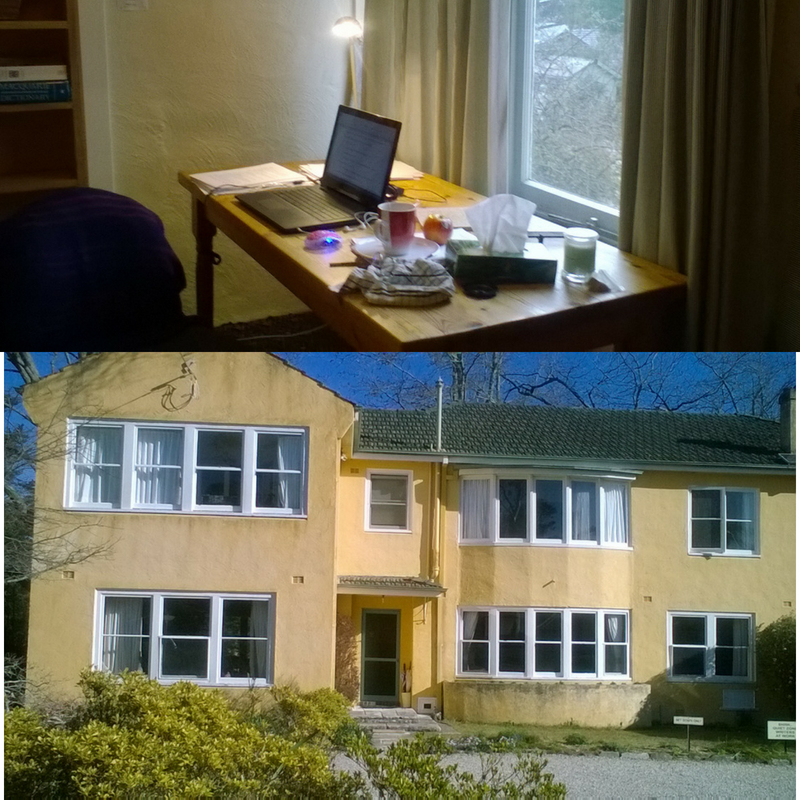 When I received the news that I had been selected for a Litlink residency at Varuna, the National Writer’s House, I thought they had made a mistake and I waited for the email stating this was the case. After a few days, when another email arrived confirming the residency, the truth of the fact settled inside me like bubbles trapped in a bottle of champagne – I found I could hardly eat or sleep from excitement. I wanted to randomly run and scream and leap in the air at inappropriate moments. Was I really going to spend two whole weeks in a beautiful mansion where I didn’t have to cook or clean or be a mother? Where amazing culinary delights would be provided every day? Where I would be with other writers – real, already published writers who could share their wisdom? Was I really going to be allowed to spend two whole uninterrupted weeks working on my book?
As the residency drew closer, my excitement turned to nerves. I am a very private and at times neurotic person, so thoughts of the four other writers started to erode at what was left of my sanity. I was about to be trapped in a house with four ego maniacs I wouldn’t be able to stand, and worst of all, I wouldn’t be able to get away from them. How big was the house anyway? The picture on the web site made it look large, but we all know how misleading real estate photography can be. What if I ended up feeling suffocated? I wouldn’t be able to work under those conditions. Or even worse, what if they all knew each other and didn’t think I would be worth talking to, because I was new to the industry and not yet published? They were going to ignore me and leave me out. I was about to feel so lonely and rejected, I wouldn’t be able to write. What an absolute nightmare this was going to be! I wish I had never applied for this damn residency!
Of course, my imaginings were unfounded. The four writers I had the pleasure of sharing my stay with were beautiful, down-to-earth, like-minded women, each talented and accomplished, and all five of us were mothers.
I found as the residency unfolded, I had made four new life-long friends. All of us began to look forward to coming together in the evening. Over our gourmet meal we would laugh and drink wine and share industry secrets…well they shared, I listened, fascinated, wondering if it would be rude to take notes.
I worked hard during the day, in the peaceful solitude and comfort of the enforced silence. When I wasn’t working, I floated in a state of utter gratitude, not quite believing I was living the writer’s dream. When the editing became too hideous, I would walk, either to the national park along the spectacular cliff face of the gorge, or into the village of Katoomba where I discovered a scattering of the most wonderful opportunity shops. Winter was turning to Spring. I found myself and the world around me began to blossom, we opened to find the sun, expanding in warm delight. Ah Varuna…how I dream of you still.