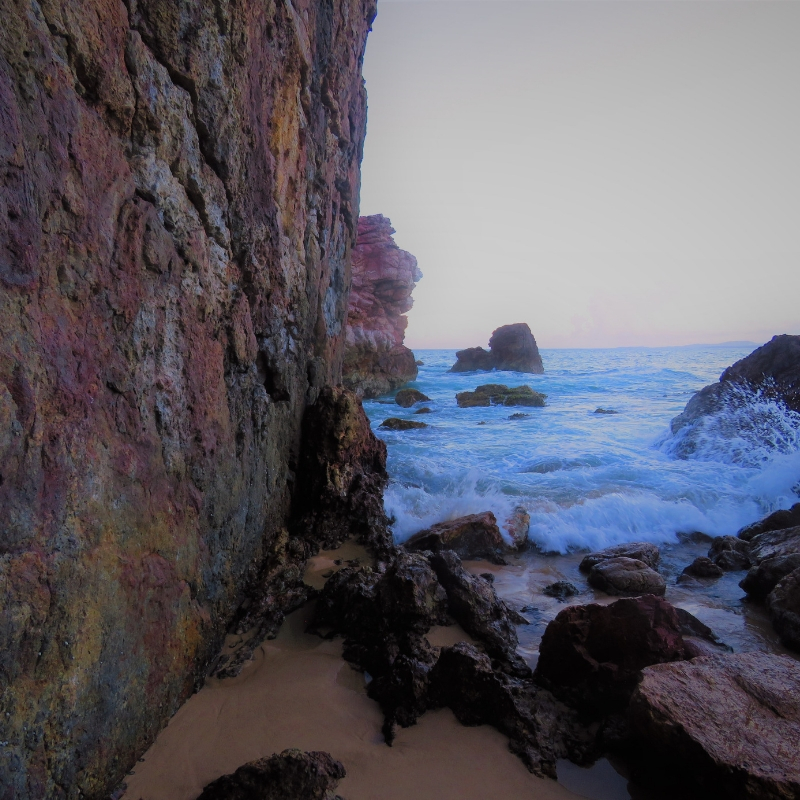 ‘Country lives too, it arrives and yearns and changes. And maybe it remembers, for the past is never over. Not even for stones and water.’ Tim Winton. Island Home – a memoir.

When I read these words by the insightful Mr Winton, I remembered the first time I sensed memory in the landscape. I was camping at Red Rock on the New South Wales coastline. I had walked out of the campground to the end of a dirt road and discovered a sheltered beach. To the right of this beach was a headland made from a distinctly red rock. There was a track, which I followed to the top. The South Pacific Ocean appeared to have no end. Overwhelmed by the enormity of the view, I looked into the crashing waves below. The white foam swirling over and between the red of the rock inexplicably filled me with an incredible sense of melancholy. I knew if I didn’t walk away I would start weeping, so I followed the path down the other side of the headland back towards the campground and came across a plaque.–

In memory of the victims and survivors of the blood rock massacres. Understanding their sacrifice will make us stronger. We as Gumbaingirr people have survived many conflicts over ownership of our traditional lands, including a massacre where many were driven off the headland at Red Rock (Blood Rock). Gumbaingirr descendants, especially women, still avoid this headland.

I was shocked by the fact that I had sensed the tragedy in the landscape before knowledge of it. Years later, when I started writing Beneath the Mother Tree, which is set in the Quandamooka area, I was equally shocked that I had never sensed the tragedies that had occurred in this landscape so familiar to me. Here I was, now in my forties, hearing stories of the Quandamooka massacres for the first time. Suddenly I saw this place, my heart country, through the eyes of the local Ngugi, Nunukul and Gorenpul people. There was heartbreak and violence scattered through-out the land. Unlike at Red Rock, however, these stories aren’t officially documented. There is no plaque on any of the massacre sites. These truths were passed down orally through the generations. My Indigenous mentor for the book – Ngugi elder Uncle Bob Anderson told me how his own grandmother Winyeeaba Murriaba, as a three-year-old, hid in the bushland and witnessed one of the massacres that occurred on Mulgumpin (Moreton Island) in 1832, when soldiers shot down at least twenty of her people. Uncle Bob writes about this in his book History, Life and Times of Robert Anderson Gheebelum, Ngugi, Mulgumpin. The more I sat and yarned and the more I researched, the more I started to see this landscape in an entirely different way. As the world of my book formed in my head, I found the red ochre of the Quandamooka merged with the Red Rock of the Gumbaingirr people’s massacre site to form the headland of Mud Rock in my novel. I realised, all over Australia there were death spots yet to be uncovered, yet to be written about. There are still many plaques to be unveiled. I found myself asking – how can we move forward into a new future where we respectfully live together, if we are emerging out of different pasts?