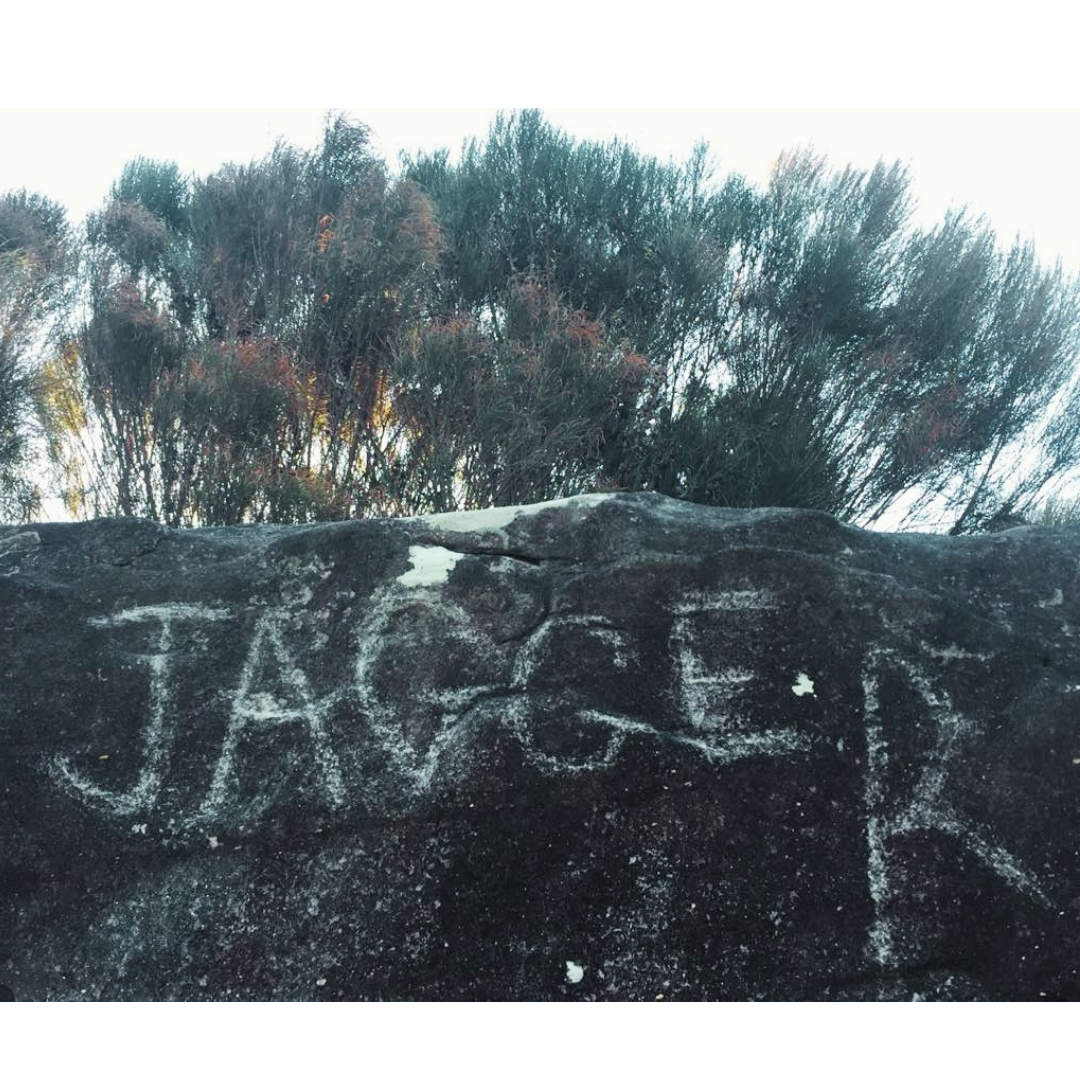 Pictured is a piece of graffiti defacing a cliff in the national park near where I live, probably drawn by a passing tourist or a bored teenager. It is nothing remarkable – just a name evoking an old rock star, scratched on with a piece of chalky sandstone gleaned from the edge of the walking trail.

The morning I came across this insignificant scrawl is a morning I will remember always – a little piece of ‘big magic,’ as Elizabeth Gilbert would say.

I don’t recall now what had triggered the fear and self-doubt, but I remember I had fled my writing desk full of the realisation that my protagonist was the most vilified specimen on the face of the Earth – a privileged white male. In the era of #metoo and #blacklivesmatter what was I thinking writing a novel about a f#cked up entitled boy-man? I had spent two years working on a book no publisher will touch. These were my thoughts as I trudged on full of self-recrimination and panic. Why hadn’t I been more strategic? I reflected on how the character had arrived – in a whoosh, fully formed, name and all, and how his mother had arrived with his name, and then other characters had appeared, making me fill page after page of a notebook in a frenetic vomit of words and ideas. The arrival was such that I abandoned another manuscript, the first draft of which I was excited about (now book three), because this shiny new story was screaming so loudly, the only way I could placate it was to write it.

And now here I was, two years later, contemplating changing the sex of my protagonist for commercial reasons, doubting the whole premise of my book. I was so overwrought, I had walked much further into the national park than was my custom, when I looked up to see my protagonist’s name scratched into the rock.

I have often wondered since, what made me glance up at that moment. I stood there choking on the wonder and joy that bubbled in me, laughing. An astounding coincidence? If my character had been called John or Josh – but Jagger? What were the chances? I chose to see it as a sign to trust my writerly instincts, that there was a reason Jagger’s story had sprung out of my subconscious, that his journey was vital and relevant to our times. The fear and choices he grapples with are, after all, choices and fears all of us are facing or will come to face in this decade in which the future of humanity will be determined.

I see this incident as a powerful reminder to keep my logical brain out of the process and write from that mysterious place we all go to in our dreams – to have the courage to trust in those wild fearless gifts that spring from the heart.

I can’t wait to share Jagger’s story with you, dear reader.

(For those of you who may have missed it, I talk about this phenomenon on this brilliant podcast on creativity -Getting it Down.)